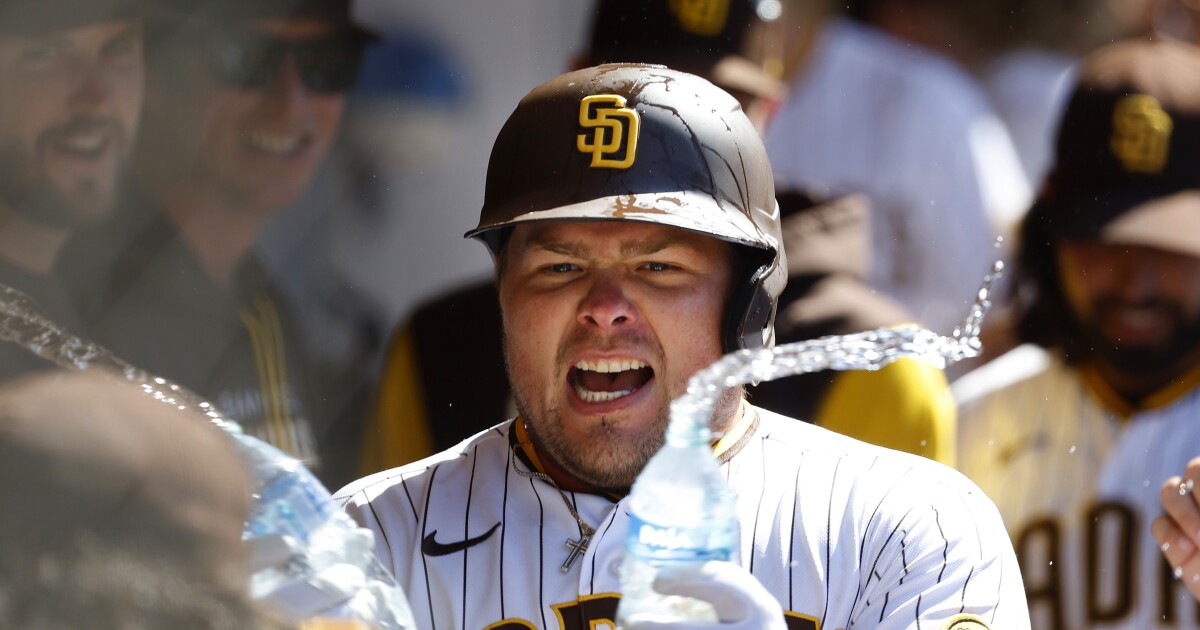 Luke Voit said Wednesday morning that a couple of swings he put on balls the night before, a simple line drive at 107.5mph and a 357ft fly ball he hit at 101.4mph, were probably his best of the season.

He was happy to report that after the Padres’ 5-2 loss Wednesday afternoon to the Cardinals, that was no longer the case.

“Now that was probably the best swing I’ve had,” he said.

This was a 420-foot home run to right center field in the ninth inning.

Voit and everyone else in the Padres clubhouse were disappointed as the team prepared to leave for Milwaukee on its first three-game losing streak of the season.

“It sucks we got swept away,” he said. “We need to dump this and…find a way to get some Ws back.”

What Voit has been doing lately is just a few of the reasons for any real optimism about the Offense’s ability to contribute to that effort.

He has four homers and an .841 OPS in 18 games since returning from the disabled list on May 10. He was homeless and had .481 OPS in 13 games at the start of the season before being sidelined with a bicep tendon injury.

“My power is in right field,” Voit said. “I’m a better hitter when I hit the ball all over the field. … It’s starting to roll.

Voit averaged one home run for every 14.46 at-bats from 2018 to 21, on 13e-highest mark in the major leagues among those with at least 900 at bats during this period. In that time playing for the Cardinals (18) and Yankees, only 46% of his hits went to left field. For a time with the Padres, Voit was sending virtually every one of his hard shots this way.

He’s been committing more pitches lately rather than missing outright with his big swings. His faults also run the other way.

“May was a much better month for me,” he said. “I still don’t feel like I’m where I want to be, but I’m obviously heading in the right direction. … I finally feel comfortable. I’m more comfortable in the box.

It was worth trying.

It will mark the epitaph of Robinson Cano’s time with the Padres, which ends Thursday. In a move that was only considered a matter of time for a few days, Cano turned down the Padres’ request for the option, earning him a free agent status. A source confirmed the plan for Cano on Wednesday night, and Cano had already been briefed.

It was a fitting end, then, that he came within feet of putting the Padres ahead in the ninth inning on Wednesday as a pinch hitter. What could have been a good story just wasn’t, as Cano sent a bases-laden change from Nick Wittgren on a 376-foot throw to left center field, where he was caught near the wall by Corey Dickerson for the final game.

“Literally two feet away from winning this game,” Voit said. “(Manager Bob Melvin) pulled the right catch again. It would have been a home run in (some) parks. … Credit to a veteran like Robbie, prepared for this situation.

Cano had three singles in his first 12 at bats with the Padres after they signed him on May 14. Wednesday was his 21st at bat without a hit since then.

“Ooh, I hit that ball well,” Cano said. “…At least I had a good shot at bat. It feels good, but too bad it didn’t end the way I wanted.

Right fielder Wil Myers did not play after receiving a silicone injection Tuesday night in his right knee.

Melvin said Myers is expected to play Thursday against the Brewers.

Myers sat out Sunday and Monday before playing Tuesday. He hinted at playing with the injury for a while and said it was but “a bit more” like the patellar tendon problem he dealt with last season.

“It’s been frustrating trying to get this thing on track,” he said. “You have a good day, then you start again in the game, severe pain in your knee. But hopefully this plan will take effect tonight and start.

Bad in the Lou

The Padres fared worse in St. Louis than anywhere else in the National League. And it’s not just the past two series, the two three-game sweeps.

And it’s not even close.

Democrats need black voters to show up this fall. Are they going?