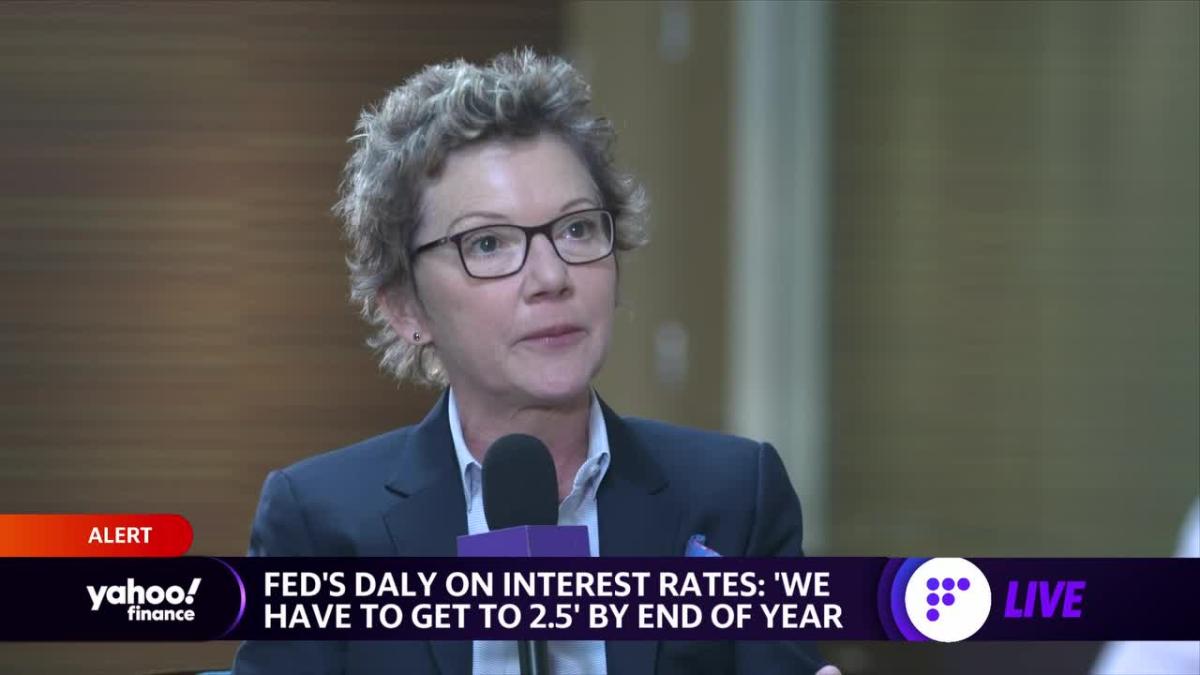 San Francisco Fed Chair Mary Daly talks to Yahoo Finance Reporter Brian Cheung about what to expect from the upcoming FOMC meeting in May.

DAVE BRIGGS: We are less than two weeks away from the Fed’s May meeting, and all signs point to another, the first 50 basis point hike since 2000. As Jared mentioned, Brian Cheung has the Fed covered for us . [? It’s yet ?] added another indication of what is to come. Hi brother, what did you hear?

BRIAN CHUNG: Hi, Dave. I’m here in front of the Federal Reserve Bank of San Francisco. A very busy Thursday with chatter from top Fed officials. Obviously listening to IMF commentary from Federal Reserve Chairman Jerome Powell in which he describes the labor market as unsustainable [? hot, ?] and said a 50 basis point rate hike is definitely on the table for the next Fed meeting. It will be May 3 and 4.

But I was lucky enough to sit live here on the spot with San Francisco Federal Reserve Chair Mary Daly, who also said she could see the arguments for, in quotes, “to raise interest rates rapidly.” Listen to our conversation from earlier this morning.

MARIE DALY: We need to get to 2.5 if we’re aiming for that. And I’m on a committee, so we haven’t deliberated on all of that yet. But that’s my point of view. If you reach 2.5 by the end of the year, you must compensate for this difference in [? two ?] percentage points in the remaining meetings. And so we will probably take a 50 basis point increase in a few meetings, also starting our balance sheet reduction program. And these things are appropriate policy, because Americans want relief from inflation. And we will do our part, which is to rebalance demand, as much as possible, with supply.

BRIAN CHUNG: And again, that 2.5% she was talking about at the beginning, the Fed is far from it. Right now the Fed is targeting interest rates between 0.25% and 0.5%, which is why the Fed might have to do what I call this huge 50 basis point hike when next meeting. Again, this still needs to be deliberated. But the San Francisco Fed president said she supports the move, at least for now.

Keep in mind that we are entering a Fed blackout period starting this weekend. So for the next nine days leading up to that May 4 meeting, we won’t be getting any more comments from the Fed. So that’s probably the last comment we’re going to get.

And then one last point that I want to leave you with before I end here, there will be some changing faces on the Federal Reserve Committee, and that’s because the announcement from the Chicago Fed earlier today that Charlie Evans, the president there, will step down as head of that bank effective early 2023. This is due to statutory limitations on how long a federal bank president can remain in that role, which means that we will have some new faces at the FOMC. Next year. You will have to remember that we will have a new Boston Fed President starting in July of this year. And then the Dallas Fed still looking for a replacement after the departure of Robert Kaplan last year. David.