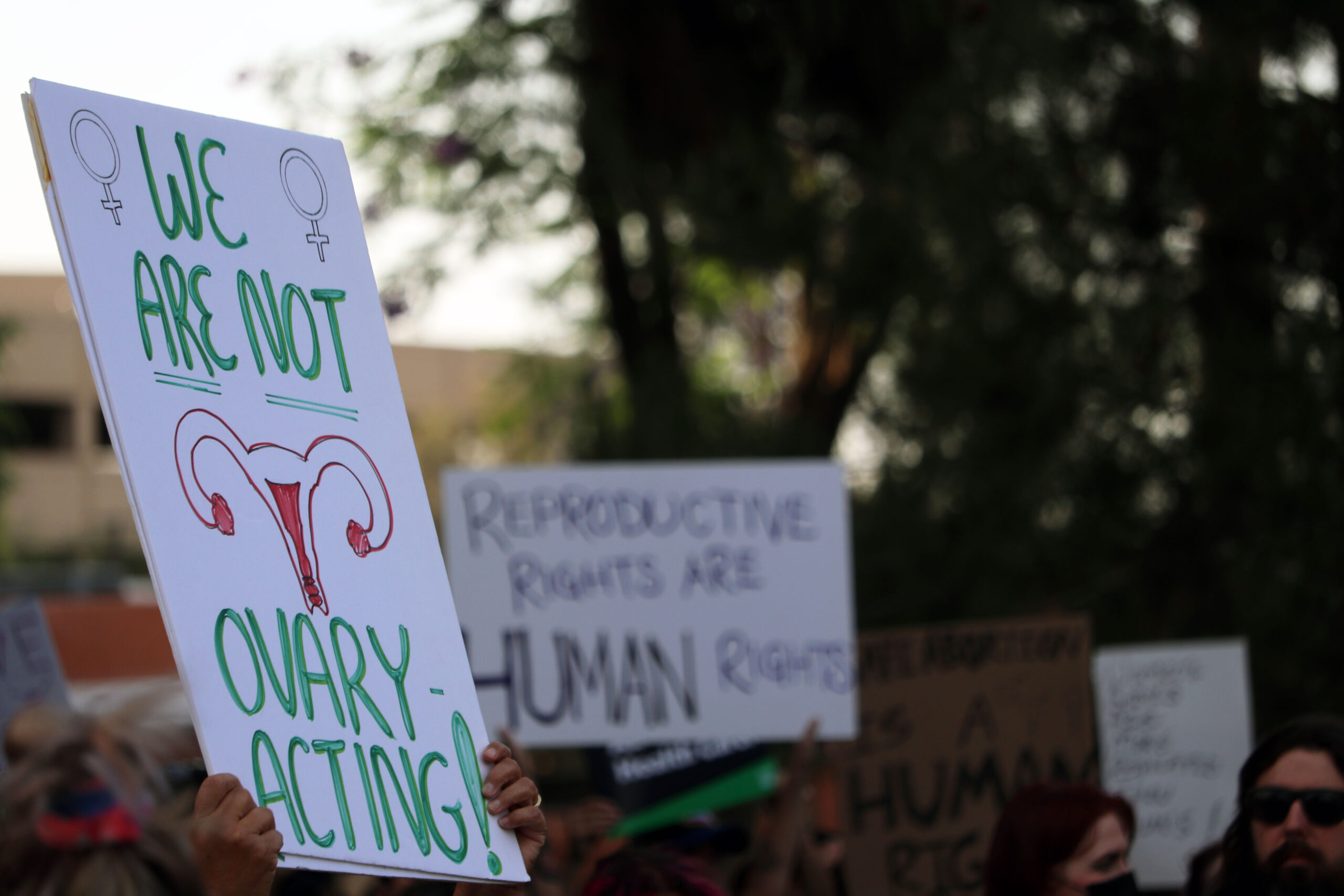 With Roe gone, Arizonans rally to demand their rights

Kim Zacsek speeded through a hot parking lot in Phoenix, accompanied by an “angel”, whose huge rainbow-colored umbrella shielded them from both the sun and the protesters around them. They called out to Kim as they passed, asking her not to abort her baby as they waved signs covered in images of tiny disfigured bodies and Bible quotes.

It was a relief for her to walk into Planned Parenthood’s air-conditioned waiting room. She was accompanied by her “angel” – a volunteer whose sole duty was to guide people through the parking lot and protect them from the barrage of hostility aimed at them.

A few weeks earlier, she had been sitting in the same waiting room before her appointment to get a contraceptive. After a routine test, the doctor came in and told her the news that she was not prepared to hear.

Get morning headlines delivered to your inbox

“She just sat down and said, ‘So you’re pregnant,'” Zacsek said, recalling the words spoken to him in October 2018. “I don’t remember what she said after that, but I know very specifically, I said, ‘How can I get rid of it?’ It seems very insensitive now, but I didn’t have to think about whether I wanted to be pregnant or not.

She had just graduated from Arizona State University. The 23-year-old was repaying student loans, living with her mother and starting her career with a part-time internship at a non-profit organization. She was unable to take care of a baby and, moreover, she did not want to.

Her doctor offered her the choice of having an abortion, and Zacsek had quickly scheduled her next appointments. At that time in Arizona, it was legally required that women undergo an ultrasound and a mandatory 24-hour waiting period before an abortion.

Zacsek said she was devastated that this unplanned pregnancy was the first time she had had an ultrasound and heard the heartbeat of a human growing inside her.

“I (imagined) before this happened, the process was going to be: find someone, fall in love, get married, get pregnant and make it that super happy time you shared together,” she said.

While Planned Parenthood was commissioned to perform an ultrasound, the doctor asked Zacsek if she wanted to receive the type of ultrasound that would emit a heartbeat. She refused.

Planned Parenthood has followed the law, while allowing its patients like Zacsek to choose in their most private moments.

A right to privacy is exactly what Roe vs. Wade, the landmark 1973 ruling that protected women’s constitutional right to abortion, has been upheld for nearly 50 years. On June 24, it was overturned by the United States Supreme Court, giving the power to each state to decide whether to allow abortions and how to regulate them. This effectively ended legal abortions in several states and left many others in legal limbo.

States must now defer to their previously enacted laws. For 13 states that had “trigger” laws designed to go into effect by the time Roe v. Wade was reversed, the criminalization of abortion happened immediately – in some states, with no exceptions for maternal health, rape or incest.

In Arizona, there is now a debate about whether officials will enforce a 158-year-old law that bans abortion except in cases where the life of the pregnant person is in danger, or if a recently passed law that criminalizes abortion after 15 weeks supersedes it.

And it’s unclear how either of these laws will interact with a 2021 law granting “personhood” to fetuses and fertilized embryos. A federal judge this month prevented this law from coming into forcedeeming it to be too vague and in conflict with other state laws.

“It’s draconian,” said Kris Mayes, a Democrat running for attorney general. “None of these laws provides an exception for a woman who is raped or victim of incest, which is inhumane and has no place in modern society.”

Jared Keenan, legal director of the American Civil Liberties Union of Arizona, pointed to the vagueness of those laws as the reason the ACLU filed an emergency motion challenging the personality requirement.

But even as the courts determine which laws can be enforced, the practical effect is what abortion haters want: Abortions have ceased altogether in Arizona following the Supreme Court ruling. Julie Gunnigle, a Democrat running for Maricopa County attorney, says elected prosecutors are deliberately failing to provide certainty for pregnant women and health care providers.

“The people who could provide clarification, who would be your Maricopa County attorney and your attorney general here in our state, are totally failing — and that’s intentional — to provide that kind of advice,” she said. “For them, chaos and cruelty are important.”

I (imagined) before that happened, the process was going to be: find someone, fall in love, get married, get pregnant, and let it be that super happy time you shared together. And I was alone, sad and angry.

Gunnigle said a person accused of having an abortion could face first-degree murder charges from an overzealous prosecutor if the personality law goes into effect. And that’s why she and Mayes echoed what about 80 elected prosecutors across the country have pledged: to refuse to prosecute those who have illegal abortions and the doctors who perform them.

“First, I don’t believe I would have the power to sue women and doctors because of our [state] Constitution,” Mayes said. “And second, the very idea of ​​suing women and doctors for the health care that many women need is outrageous.”

Gunnigle pledged to prioritize the health of those who may become pregnant and said she would use her discretion as a prosecutor to do so.

Gunnigle said that in the face of her fight to win office in November, there is one thing that makes her optimistic for the future.

“The number of young people – high school and college students, in particular – who have come to me and told me they weren’t paying attention, and they are now, has been absolutely overwhelming,” she said. “It’s nice to be part of their story.”

In Maricopa County, 29-year-old Catherine Rabon is one such person.

Rabon arrived at the Arizona State Capitol just hours later Roe vs. Wade was overthrown and joined the thousands of people who had gathered there to protest. She picked up an ACLU sign and joined in chants of “my body, my rights, my body, my choice” as temperatures peaked at 104 degrees.

It was the first protest she had attended in over half a decade. She said she felt encouraged to take action after the court ruling.

As the night wore on, protesters were encountered tear gas fired by state troopers in an attempt to disperse the crowd. Dozens of protests took place across the country that night, but the Arizona Department of Public Safety was the only law enforcement agency in the country reported using tear gas on protesters.

Just over 100 miles away in Tucson, 25-year-old Theo Grovich was also protesting. Grovich, who uses the pronouns them/them, attended the Tucson protest with their partner. Their placard, held high above their heads for most of the protest, read “my womb has more rules than your guns”.

Grovich said they felt compelled to participate in the protest after the overthrow of Roe vs. Wade because they feel silenced by the Supreme Court decision. At the same time, they also felt their place in this movement had been overlooked.

Like other non-binary and transgender people who have wombs, Grovich is often misunderstood when it comes to reproductive rights. While they take no offense in calling reproductive rights a women’s issue, they would also like to see more representation in this movement.

In a statement released in 2021, Planned Parenthood acknowledged this issue.

“Pregnancy can be an incredibly triggering experience for trans and non-binary people due to its highly gendered status in society. It is our duty to ensure that their experience in our health centers is as positive, positive and encouraging as possible. »

Just hours after entering Planned Parenthood that October morning, Kim Zacsek was ushered out the back door of the building by angels and into her mother’s car. She felt tired, but relieved. For weeks she had felt stuck, “waiting not to be pregnant,” she said.

She still wonders whether or not she would like to be a parent one day, but she is grateful to have the choice. Her 66-year-old mother, who drove her to her appointment that day, was also grateful. When her mother was 16 in 1969, she became pregnant by a much older man. As a member of a religious family and at a time when abortion was illegal in the United States, she felt she had no choice but to give birth. She did and gave that child up for adoption.

“She had no options, she was told what she was going to do,” Zacsek said. “She just didn’t want that for me.”

She hopes for a better future and is encouraged by people across the country who are taking a stand against the Supreme Court’s decision.

“I think what gave me hope was seeing the number of people who were willing to come forward at such short notice to stand up for rights,” she said of the demonstration on June 24. “To hear from politicians who know this is a step backwards for the women’s rights movement to dedicate and recommit to giving us those rights back, and to see so many young people taking a stand and standing up for what they believe is right, that’s what gives me hope.”

Rabon recalls a moment that night when, as the counter-protesters made their presence known, individuals in the crowd stepped forward and opened their radiant rainbow umbrellas – blocking their signs.